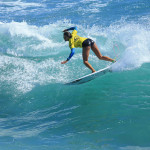 OCEANSIDE, Calif. (July 25, 2015) – Day two of the three-day Paul Mitchell Supergirl Pro — the largest all-women’s surf contest in the world and the only WSL Women’s QS6000 event in the continental U.S. — wrapped with an intense afternoon of surfing as former champ Malia Manuel (HAW) narrowly escaped elimination on her last wave in the Round of 24 and defending champ, Sage Erickson (USA), came from behind in the final few seconds of her heat.

“It was a crazy heat! I haven’t battled that hard for advancement in a long time,” said reigning Supergirl Pro champ, Sage Erickson. “The last two minutes were kind of a blur – I needed a score and to get it in the last 10 seconds, without priority, was surreal. This event means so much to me. I couldn’t go down without a fight!”

The action continues on Sunday as the top-seed titans take to the water starting at 8 a.m. at the Oceanside Pier with a field of 16 competitors, narrowed from 108. Some of the world’s best female surfers will converge on the surf, including former Supergirl winners and podium vets, like Sage Erikson (USA), Malia Manuel (HAW), Coco Ho (HAW), Lakey Peterson (USA) and #2-ranked in the world, Courtney Conlogue (USA), who won the Supergirl Pro in 2009.

SoCal’s Courtney Conlogue looked unstoppable winning both of her heats, posting a massive 9.30 on her opening wave.  “When the waves came through there were really good scoring opportunities and I was stoked to get that first wave right off-the-bat,” said Conlogue. “I’m thrilled to be in the final rounds and to put on a jersey in front of a home crowd to once again go for that pink Supergirl cape. I’m so grateful to Supergirl and Paul Mitchell for supporting female surfers, and I’m excited to see it grow to be such an important qualifying event.”

The free event runs through Sunday from 8 a.m. to 5 p.m. and will feature meet-and-greets with top pros, giveaways, the Supergirl Skate Pro skateboarding competition presented by Active Rideshop, a Celebrity Surf Contest, the Kona Beer Garden, a Surf Film Festival and complimentary hair styling by Paul Mitchell in their on-site style salon.

The Paul Mitchell Supergirl Pro is the only WSL QS6000 female event in the continental U.S. The live contest will be streamed at http://www.asaentertainment.com/supergirlskatepro/supergirl-live/ on Sunday, July 26 from 8 a.m. to 4 p.m. PST. The event will also be broadcast on FOX Sports this fall. For more detailed information on the Paul Mitchell Supergirl Pro, please visit www.supergirlpro.com.

SUPERGIRL and all related characters and elements are trademarks of and © DCComics.

The World Surf League (WSL) organizes the annual tour of professional surf competitions and broadcasts each event live at WorldSurfLeague.com where you can experience the athleticism, drama and adventure of competitive surfing — anywhere and anytime it’s on. The WSL sanctions and operates the following tours: the Junior Tour, Longboard Tour, the Qualifying Series (QS), the Big Wave Tour and the crown jewel of the sport, the WSL Championship Tour (CT) which determines the sport’s undisputed world champions. The organization is headquartered in Santa Monica, California with Commercial Offices in New York. The offices are supported by regional centers in Africa, Asia, Australasia, Europe, Hawaii, North America and South America.