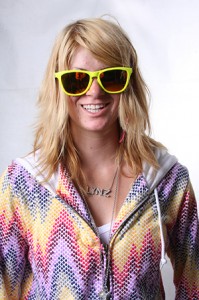 Intimidated?  Lyn-Z walks you through it.

Getting started in skateboarding can be the hardest part of the sport. The falls, balance and the dreaded first drop-in are all challenges too, but without taking that initial plunge, you’ll never even get there. And while most boys are given skateboards as presents at a young age, girls often get started much later in life, making it that much more difficult.

Supergirl Jam athlete and ambassador Lyn-Z Pastrana is a bit of an anomaly in that respect. She got her first skateboard when she was barely old enough to talk and had an older brother to learn from. “I’ve been around it my whole life, but my brother skateboarded and that’s kind of why I actually wanted to get into it.”

At age six, her brother Tyler bought Lyn-Z a membership to the local park, and she would tag along when he went skating. When she was 11, Tyler broke his ankle, and so Lyn-Z had no reason to go skate. “That was when I really got into it because it was my choice to go skate and I wasn’t just going because my brother was going”, she said. “I just started to really love it.”

Now, Lyn-Z has earned her place as one of the best female skaters in the world. She does it all, street, vert, and is even the only girl to have ever jumped the mega ramp, a serious 50-foot gap. She lives in Cardiff, CA and skates the Encinitas YMCA all summer, then travels to Mammoth for the winters, where she’s even gotten very into snowboarding, competing in that as well. 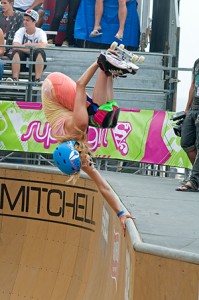 Skateboarding has taken Lyn-Z around the world, she’s won X-Games gold, and appeared in magazines and on TV, and has accrued a long list of sponsors. Now if that’s not a good reason to start skateboarding, then do it because it’s fun. Lyn-Z offered these tips for girls who want to get into skateboarding:

Invest in good equipment. The boards at Walmart and other places like that aren’t as good of quality so it’s going to make it harder to learn on. It does get expensive to buy a good skateboard but it really does make a difference.

Start with the basics. To start with you just want to learn to be comfortable on your board and push around, maybe an ollie. The best thing to do is find someone in your neighborhood and learn how to roll, push, and get comfortable standing on your skateboard, and then head to the skatepark. From there people might teach you how to stop or do whatever. Just work your way up on to the next thing.

If you don’t know any one who skates: I think the best thing for someone who doesn’t have any skateboarding around them is to order a Tony Hawk Trick Tip Video. That’s the next best thing.