LOS ANGELES (July 26, 2008) – In front of record crowds, Coco Ho (Oahu, HI) ripped through the waves in Huntington Beach, Calif. this afternoon to win the 2008 Supergirl Junior Pro surfing competition. With just five minutes left on the clock, Ho battled through the tough surf with aggressive style and form that impressed the judges and the crowd to claim the victory. 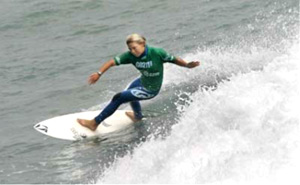 “Since I was given the wild card for this event, I’m over the moon with excitement,” said Ho as she donned the symbolic Supergirl Junior Pro winning cape. “I have fulfilled my goal of making the quarters of the women’s WQS and the finals, as well as the [Supergirl] Junior Pro, so it feels great.”

Second place finisher Nikita Robb was equally as excited. “This is my best result this year. I’m happy that the Junior Pro is being put back on the schedule.”

While the surfers were battling it out in the water, the skateboarding ‘actionistas’ were riding the ramps in the Skateboard Vert and Inline Rail Jam Best Trick contests. Throngs of fans swarmed the stands to watch the women push the limits of the courses and their own personal flair. After a 30-minute, best trick session, Soul Bowl winner Mimi Knoop nearly claimed her second S3 Supergirl Jam victory this weekend with a “frontside-invert” but was rocked to second place when Sao Paulo Brazil’s Karen Jones landed a “pop-shoveit” to capture first place. Rounding out the top four were Lyn-Z Adams Hawkins (Cardiff, Calif.) and Cara-Beth Burnside (Encinitas, Calif.). 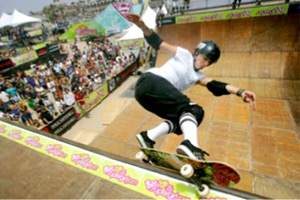 The girls pulled out all the stops in the Inline Rail Jam, wowing the spectators with their creativity and daring tricks. They cheered on each other, supporting their fellow competitors in true Supergirl style. Crowd favorite Fallon Hefferman (San Francisco, Calif.) performed an impressive “backside top acid backside royale” to secure third place, conceding second to Slovakia’s Martina Svobodova whose “true spin topside royale” brought loud cheers. However, it was the coolness and style of 16-year-old Chynna Weierstallâ€™s “unity step acid” that brought the most rousing reaction from the crowd and the highest scores. In her first pro event, Weierstall decisively took first place as Brazilâ€™s Crissi “G” Graselli hoisted her high above the crowd in celebration.

The final day of the S3 Supergirl Jam starts tomorrow at 10:00 a.m. with the snowboard rail jam preliminary rounds that will include some of the best snowboard rail riders and 15 tons of snow on the beach, followed by skateboard street finals at 12:00 p.m.

S3 Supergirl Jam is designed to promote and celebrate female strength, independence and empowerment by creating a platform for today’s athletes to compete in multiple action sports disciplines. The event features top female athletes in surf, skate and snow, as well as female bands and a variety of other activities. This year’s S3 Supergirl Jam features elevated levels of competition, increased prize purse, and broadened appeal for spectators. The S3 Supergirl Jam will air as part of event producer ASA Entertainment’s TV programming on CBS Sports and cable television. Please stay tuned tos3supergirljam.com or check your local listings for more broadcast details.

About ASA Entertainment:
The leader in the action sports industry since 1994, ASA Entertainment, headquartered in Culver City, California is the first and largest action sports event and television production company in the world. The company produces more than 200 events and 100 television programs annually around the globe that feature skateboarding, freestyle BMX, inline skating, freeskiing, freestyle motocross, snowboarding and music. Its events are broadcast on CBS, Spike, VERSUS, Fuel and Fox Sports Net domestically and distributed to more than 1 billion HH globally throughout Asia, Europe, USA, Africa, Canada, South & Central America and Australia. ASA’s properties range from large-scale international competitions such as the LG Action Sports World Championships to grassroots amateur contests, lifestyle and branded entertainment events, demonstrations, exhibitions and mobile tours. As one of the oldest and most established organizations in action sports, ASA Entertainment leads the market in developing premium content around the fastest growing sector of American sports. For more information visitwww.asaentertainment.com.

About DC Comics:
DC Comics, a Warner Bros. Entertainment Company, is the largest English-language publisher of comics in the world and home to such iconic characters as Superman, Batman, Wonder Woman and the Sandman. These DC Super Heroes and others have starred in comic books, movies, television series (both animated and live-action) and cyberspace, thrilling audiences of all ages for generations. DC Comics’ Web site is located at www.dccomics.com.

SUPERGIRL and all related characters and elements are trademarks of and (c) DC Comics.