Top female athletes showcased their skateboarding and snowboarding skills in front of record crowds along the famed Venice Beach boardwalk as the 5th Annual Supergirl Jam series came to a close today. 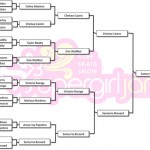 Set against a palm tree-lined backdrop, beachgoers were treated to some of the
world’s best female snowboarders as they battled it out on a 28-foot-tall man-made
mountain packed with 80,000 pounds of snow. Danyale Patterson was attempting to
defend her title against a tough field of competitors who brought mind-boggling tricks
that pushed the progression of women’s rail riding to the next level. Ultimately, Laurie
Currier stood out, landing clutch tricks like ollying over a three-foot narrow steel down
bar to execute a hardway 180 to switch 50-50 to regular, scoring her third Supergirl
Rail Jam title and the first place check. Patterson and Desiree Melancon rounded out
the podium in second and third, respectively.

The crowd moved from snowboarding to skate where the top female pro skaters in the
world competed on a custom-built course. Alexis Sablone— Supergirl reigning champ
and X Games skateboard street gold medalist— reclaimed her title, pulling out the
biggest and hardest tricks among her competitors, including a kickflip 50-50 on the
hubba and nollie-heeling the Euro-gap.

Lacey Baker (Covina, CA) took second in Skateboard Street and Amy Caron
(Huntington Beach, CA) took third. Baker stepped up with some of the most technical
tricks in the contest. Other standout athletes included Vanessa Torres, who impressed
the crowd with a frontside boardside down the rail, one of the best tricks of the day.