I don’t know anyone who doesn’t subscribe to Netflix. It’s perfect because you can watch a marathon of some pretty great TV series and never watch one single commercial. And for the price of Netflix compared to cable, I’ll wait for the next season to make its appearance to online streaming. The problem I have with Netflix is that when I want to watch a movie, I can never find one that I really want to watch.

So in honor of the Supergirl Pro last week, I’ve come up with a list of movies and series all about surfing. These are all available to stream on Netflix, and hopefully get you in the mood for some serious surfing. 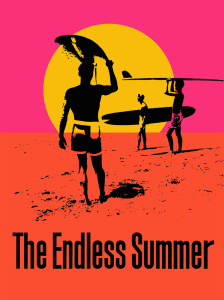 Don’t be fooled by this movie because it was filmed in 1966. It’s about Mike Hynson and Robert August who travel the world in search of an endless summer full of waves and good times. Once you’ve seen this, it’ll be pretty obvious why it’s a classic. Plus, it’s great for a good laugh or two. It’s also fun to watch the different culture and clothing of the decade.

For millennials, this movie is pretty much a classic. Filmed in 2002 featuring Kate Bosworth, it’s a chick flick that features plenty of waves and romance. This guilty pleasure is sure to be watched over and over.

Although it’s a sequel to Blue Crush, they’re nothing alike at all. Filmed in 2011, this movie is about a girl who skips college for Africa chasing the dream of surfing Jeffery’s Bay. Although a bit cheesy at times, it’s always fun to watch girls rip. Since Roxy sponsors it, you’ll also see an appearance from Sally Fitzgibbons and Laura Enever.

This documentary follows the story of pro-surfer Lakey Peterson. Her story of how she got into surfing and what it took to get to where she is today will have you motivated to wax up your board. This movie was released in 2013.

A documentary series on Netflix, this show follows Ross Clarke-Jones and Tom Carroll with their meteorologist team. They chase the biggest waves around the world for an epic ride. This show will send shivers down your spine even thinking of being in water with waves that big.

This movie is about three guys with disabilities who go on a surf adventure to Costa Rica. Released in 2012, this movie really goes to show that if you want something bad enough, there’s nothing that can stand in your way.

If you do a little digging, you can find plenty of surf movies to waste your day away on Netflix. These are the ones that I usually go to when I want to stream a good surf show.

TIFFANY BRODEN
Tiffany Broden is a resident of Seattle, WA who is always finding adventures in the Northwest. On the weekends you can usually find her in the mountains snowboarding or at the beach surfing. When she’s not on an epic adventure you can find her at home doing arts and crafts or yoga. She graduated from Minnesota State University Moorhead in 2011 with a degree in Mass Communications with an emphasis in advertising. She is currently working for a material handling company doing in-house marketing.