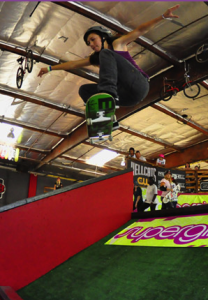 LOS ANGELES (June 30, 2010) – Twenty-five of the country’s best amateur female skateboarders came together this afternoon at SKATELAB in Simi Valley, Calif. to compete in the first event of the 4th Annual Supergirl Jam series, the Supergirl Am Jam. After trick-filled heats that left even the judges applauding, Brooke Whipp of Salt Lake City, UT rode away with the title and qualified to compete with the female pros in the Supergirl Jam Skateboard Street contest on August 22 at Venice Beach.

The 2010 Supergirl Jam event series, the industry’s only large-scale, all-girls action sports competition, features more than 100 of the world’s top female action sports athletes competing in surfing, skateboarding, snowboarding and inline skating and is designed to celebrate female strength, independence and empowerment. The Supergirl Am Jam is the first event in this year’s series and highlighted some of the sports’ emerging skateboarding talent. It was added to the Supergirl Jam series last year to not only showcase the top amateur skaters in the U.S., but to also continue the progression of female action sports.

After today’s preliminary rounds, the field of competitors was reduced to 12 young ladies with Whipp finishing the early session and entering the finals in fourth place. Starting with a clean slate, the final 12 competitors were given a one-minute individual run and then showcased their best tricks during an eight-minute jam session.

Making what the event announcer termed a “silent attack”, Whipp cleanly executed trick after trick, but it was her kick flip down the turf gap which most impressed the judges and clinched the title.

“This feels amazing – it feels great!” said Whipp. “It’s so awesome to see so many of the girls here. I never see this many girls skating at home. But, put them all together – they’re so good!”

Abisha Alshebaiki, Supergirl Jam and X Games veteran, judged the contest and was surprised at the level of the competition. “I was so shocked. Samarria’s [Brevard] (Riverside, Calif.) trey-flip down the turf gap – that’s a trick you see guys do! Now I feel like I have to step it up because thanks to events like this, these ladies are progressing so quickly.”

The 2010 Supergirl Jam event series continues with the Supergirl Pro Junior Surf contest at Oceanside Beach Pier in Oceanside, Calif. on August 14 and concludes one week later on August 22, when the skateboard street, snowboard and inline skate pros will compete in the finale event of the Supergirl Jam at Venice Beach.

All of the Supergirl Jam events are free to spectators and expect to play before more than 100,000 fans. CBS, Fox Sports Net (FSN) and FUEL TV will combine to air more than eight hours of national television coverage about the event this fall.

For more details on the Supergirl Jam, please stay tuned to SupergirlJam.com for event information and competition updates.

The Association of Surfing Professionals (ASP) is the governing body of professional surfing. Crowning surfing’s undisputed world champions since 1976, the ASP sanctions the following tours: the Foster’s ASP World Tour, the ASP Women’s World Tour, the World Qualifying Series (WQS) and the World Longboarding, Junior and Masters Championships. The ASP is dedicated to showcasing the world’s best surfing talent in a variety of progressive formats and has revolutionized the way the world watches surfing via their webcasts. The organization is divided into seven different regions: Africa, Asia, Australasia, Europe, Hawaii, North America, and South America.

DC Comics, a Warner Bros. Entertainment Company, is the largest English-language publisher of comics in the world and home to such iconic characters as Superman, Batman, Wonder Woman and the Sandman. These DC Super Heroes and others have starred in comic books, movies, television series (both animated and live-action) and cyberspace, thrilling audiences of all ages for generations. DC Comics’ Web site is located at www.dccomics.com.

Supergirl and all related characters and elements are trademarks of and (c) DC Comics.